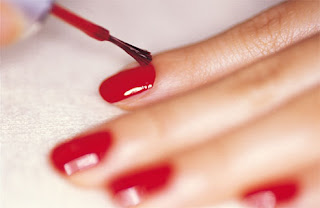 I love my nail salon. I really do.

I love the sweet, hard working Asian couple who own it.

I love patronizing their business and helping them succeed.

I love their talent and their thoroughness and their attention to detail.

But frankly, the place is an enigma to me.

On my first visit, one of the manicurists stood out immediately by the mere fact that she was not Asian.  Although it seemed unusual that they would employ a single American as part of their team, I really didn't give it too much thought.

I listened in silent wonder as this woman - who I was sure was their token American worker - chattered effortlessly in fluent Asian-ese with everyone else who worked in the salon.  It was hard for me to take my eyes off of her as unfamiliar syllables flowed out of her mouth as easy as apple pie.  The contradiction of her English look and her not-so-English language was hard to wrap my brain around.

My next visit, I got Miss Not-So-American as my manicurist.  In talking to her over filing and nail polish, I discovered she had a daughter that worked at the very store my daughter and I were going to be shopping at that afternoon.  Perfect!  I thought.  Maybe seeing her daughter would put another piece into the puzzle I still hadn't figured out.  I asked her who to ask for; what her daughter looked like.  "Oh", she replied.  "Just ask for Kimberly.  She's a little Asian girl....."

Rats.  This wasn't helping at all.

We met Kimberly that afternoon.  Beautiful Asian young woman.  Hard to believe, with a mother that looked like she'd stepped straight off the Mayflower.  The puzzle was still incomplete.

I simply resigned to never being able to figure it out.  I decided that when at the salon, I'll continue in wonder at the mismatch of persona and language and that will be that.

But the clincher was my next appointment.

The owner of the salon, an Asian gal who looked like she should be speaking another language, was doing my nails.  In the middle of it, she got a phone call.  Opening her phone, I heard her say, "Hello? Oh, hi Mom.  How are you?"  It was her mother.  And their entire conversation was in plain, understandable-by-me English.

I had to smile.

Only in America.
Posted by Beth Coulton