I was talking with a first-time mom recently and she was chatting with me about her baby girl and all the wonder that goes with having a newborn, a child, an extension of yourself for the very first time. Amazingly enough, she was out alone without said appendage, so she was missing her baby and was eager to talk about her.   At the end of our conversation, I asked, “What did you name her?”
To my surprise, she didn't answer right away.

It was only for a moment, but it was as if she needed to think about it, to recall it, to bring to mind what that name choice had ultimately been.  She finally looked at me and said, “Madison Joy”.  I told her it was a beautiful name, which indeed it is.


But I was struck by the pause, because that skip of beats made it seem like she couldn’t remember what she had named her little one.
And I get that.  It could have happened for a number of reasons; lack of sleep, back-to-work stresses, her mind on other things.  It could also be due to the fact that her daughter is a brand new life in her life, one she’s not quite used to accounting for yet, one who has come along and wonderfully disrupted all things pre-motherhood and the adjustment isn’t quite flowing naturally.
(One day, she'll be saying that daughter's name so many times while trying to get her to clean up her room she'll wish she could forget it...just for a second.... :)
For right now, this new mom is just suffering from human nature.   Truth be told, I'm sure any of us who have experienced life with a newborn can say, "been there done that", along with almost-forgetting-our-child-at-church-or-the-mall, and never really doing that 7th buckle on the car seat because oh my heavens the baby is wailing and can we please just go now.


It's ok.  It's just human nature.  Human. Flawed. Nature.
And let's all breathe a sigh of relief because the good news is - it’s not God’s nature.
I am never a new name to Him.  He created me, caused me to be and sent me forth.  He knew me from the beginning, and will know me to the end.  He never pauses when He recounts my life or calls my name.  I am His and He is mine, and nothing can change that fact.  Ever.
God says in Psalm 139: 13-16 – “For you created my inmost being; you knit me together in my mother’s womb. I praise you because I am fearfully and wonderfully made; your works are wonderful, I know that full well.  My frame was not hidden from you when I was made in the secret place, when I was woven together in the depths of the earth. Your eyes saw my unformed body; all the days ordained for me were written in your book before one of them came to be.”
How marvelous to be thought up by God.  How miraculous to be created by God. How wonderful to be known by God.
He is above all, in all and through all.  And He knows my name.
And that, my friends, gives me pause. 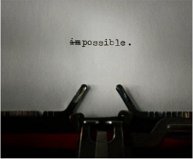 I like this picture for a number of reasons.  Probably not the least of which is that it reminds me of the old manual typewriter we had in the back room of our house when I was growing up.    Oh, those keys - you had to really pound them in order to successfully get ink on paper.  And that ribbon- if you remember the machine, then you also remember the ribbon would snag and snarl and your fingers would get black and messy as you tried to fix it.  Then there was the problem of accidentally hitting two keys at once (which wasn't hard to do); they would slam up and hit the roller at the same time and interlock just so, and once again you'd have to get your hands in there to unhook them and return them to their rightful place.  It was a slow, painstaking process to get a typewritten letter out in one try for most people.

Except for my dad.

He was a World War II vet who, in his retirement free time, simply loved taking on the insurance company, the local borough and township offices, and any place else he could send a letter to in order to get things straightened out.  It didn't matter that he knew zero keyboarding techniques and only used his pointer finger on each hand. My mother and I used to shake our heads in wonder as we listened to him from the living room.  One time I looked at her and said, "You'd never know he wasn't using all ten, would you?"  That man could make those windshield-wiper-looking letter arms fly like there was no tomorrow.

And take on the typewritten world, he did.

What I also love about this picture is that taking out two letters changes the definition 180 degrees.   It repositions the entire focus and meaning of the word.  That simple act of cutting off the front takes me from defeat to promise, from discouragement to hope.  From impossible to possible.

On the other hand, why should I cross out those areas of my life that to me seem impossible?  After all how can I, in my finite mind, know what is possible and what isn't?  Why not just throw it all in the "possible" column until proven otherwise?  That would be perhaps healthier and definitely a more hopeful approach to life.  Why kill the dream before I've even tried because I think it can't be done?

Jesus looked at them and said, “With man this is impossible, but with God all things are possible.” Matthew 19:26