Last night, we had a stray dog at our back door.  In the twelve years we've lived here, that has never happened; a dog just showing up and hanging around like it had lived here forever.

I noticed it when I heard trash cans being jostled around outside late in the evening.  Our golden retriever Lucy, the rightful owner of the property, had been laying in the family room but now approached the sliding glass door and let out a low growl. With it being dark outside, I had no idea what was on the other side of said door. I turned on the outside light and held my breath.  There standing on the flagstone was the tallest, thinnest, gangliest black lab I'd ever seen.  He looked intently in at me and started to bark because, I presume, I wasn't letting him in.  Shame on me.

After a few minutes- which probably seemed like an eternity to Lucy because at this point she had worn a hole in the carpet spinning excited circles - the lab just flopped down on the patio, made itself comfortable, and looked up at me as if I was expected to make the next move, because he was here to stay.

Something about his assumption that if he made himself at home we would meet all his needs -  even though we didn't know him - made me totally dig this dog.   It was as if he was adopting us, whether we liked it or not.  Fortunately for us, the relationship only lasted about an hour until he packed up and moved along, hopefully home to his real family and dog dish.

Funny how that dog prodded me to think about my relationship with God.  Do I come to Jesus that easily - with the same perfect assurance that if I just flop down and look up, I'll be taken care of ?  There was no pretention with this animal - he didn't clean up or dress up or even bring us a present.  There was just him, just as he was.  And somehow he knew he'd found a safe place.

And that seems like a pretty good way to be.

Sometimes when life is dark and I'm not sure when I'll see the sun again, at just the right moment the sky cracks open a bit; enough so that I can see there's still blue above the clouds and the sun is still shining just the same, no matter what I'm going through.

And hope is born. 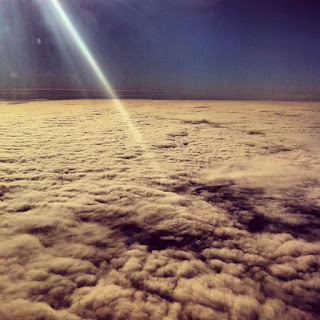 photo credit- Chris Coulton
Just like a weed growing in the pavement, hope only needs the tiniest of breaks in the tough times to wiggle up through.  I've always been amazed at what the smallest amount of hope can do; what life it can bring to a soul.  A little goes a long way.
That's because -
hope says all is not lost.
Hope says things will turn around one day.
Hope says I'm not forgotten; God has heard me.
And that sustains me, especially when the clouds close back up and the blue sky is gone.
I'll remember I've felt hope; I'll remember I've seen God.
And I'll remember that no matter what, the Son is still shining.
Posted by Beth Coulton No comments:

Take me in your direction.

Make my focus trusting in You.

Let me not depend on old habits, comfortable escapes, or my usual means of running away. 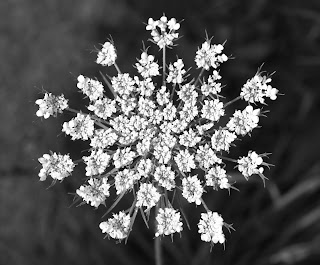 Let me step out into something new - something You have formed for me; a safe place to fall, a spot in Your arms where You'll hold me and carry me through.
In these times when I can't see around the next bend in the road, take my hand and lead me step by step.
For now, my next step is today.
May I make it count for Your kingdom.
﻿
Posted by Beth Coulton No comments:

excuse me while I wait

It's a quiet time.

It's a waiting time.

I'm not sure what's happening, but God is definitely up to something. It's not like me to be without answers.  Without a plan.  Without being able to see way down the path and know what's coming.

But this time I don't.  And after fighting it (and Him) for a while, I realized I needed to stop trying to get out of the arid, lifeless, drab desert and learn from it instead.

Because I'm in it for a reason.

God has me here to wander for a while in order to teach me something.

And I would be wise to sit at His feet and ask Him what it is.

Things are quiet in my life right now, and the waiting for change seems to go on forever.  Stories and words that longed to pour out my fingers onto this blog have quieted down and become still for a season.  But I'm learning to enjoy it.  To enjoy the break from all the things I did and depended on for happiness, contentedness and life.  To realize I can only, ever depend on Him.

As things get stripped away, only one thing remains.

And He, my friends, is enough.