Love is more than... 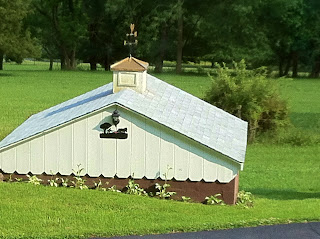 When I was little I wasn't allowed to sit on the shingled roof of our storage shed. Since the shed was built into the side of a hill, it was very easy to walk from one part of the lawn, take a step up and be on the roof.  And while it didn't go very high, sitting atop of it made us kids feel like kings and queens of the land, surveying our kingdom.

Which would make us disobedient royalty because it was against the rules.

One summer afternoon, something got the best of me.  I can't remember quite what that something was, but it made me go I went on the roof.  I had probably forgotten the rule and was just caught up in being a kid and having a good time and sitting somewhere high.  It was great.

Until I was climbing down and broke a shingle.

And the memory of that ruling came to me in an instant.

I stood there, broken roof piece in hand, and knew I'd done it.

I found my mom in the kitchen and told her my story.  She listened, and then looked at me and said, "You'll have to wait until your father gets home and tell him."  Rats. This wasn't going according to plan. She wasn't going to get me out of it.  (On the other hand, I have no idea why my mother said this because my father was about the gentlest creature around. This was the one and only time my mother ever used that line on me. And on that day it worked just fine. Shiver me timbers.)

I still remember that afternoon, sitting on the top step outside the front door waiting for him to pull in the driveway after work. I remember holding that piece of asphalt roofing material in my hand, knowing it was enough evidence to send me to bed without dinner at least, and perhaps eradicate all my summer plans at most.

The car pulled in.  Dad came up the steps.  I'm sure I immediately blubbered in my preteen way something about I broke a shingle because I was on the roof and I wasn't supposed to be and I didn't listen and oh I'm so sorry and......

My father paused for a moment.  Then he patted my head as he walked by, and I'll never forget what he said.

"Love is more than a broken shingle."

I'm almost positive he was smiling.  Even he knew when he was being corny.  And even he knew when his daughter had been punished enough just by waiting for hours to be able to tell him her error and say she was sorry.

As I finally let out a breath I'd been holding in for quite some time, I felt that relief of being forgiven, of the man in charge saying "no big deal", and of not getting what I deserved.

You may be sitting with brokenness today, holding wrongdoings in hand to show your Father.  You may not be sure just how He'll receive you, because you've done what He asked you specifically not to do.

We've all been there, done those things.

And while He may not actually pat your head and give you a wry one-liner, He will always, always exude grace and forgive you and fill you with peace when you come to Him and lay your sins and sorrows at His feet.

So get up off the top step and go to Him because you can.

This time, He's the one waiting for you.
Posted by Beth Coulton