A good vote for a good cause 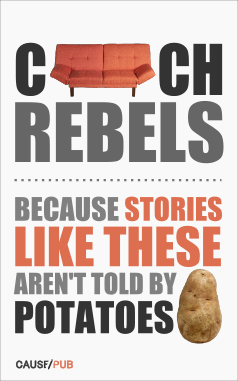 Just like a good politician, I am looking for your vote!  I have a story submitted on the site, CausePub, where many people have entered their "I got off the couch and did something about it" stories.  The best ones (with the most votes) will be published in a book whose proceeds will go to provide 45,000 people in Africa with clean water.
Here's an excerpt from the site- "CausePub has teamed up with Blood:Water Mission. For every book sold, Blood:Water Mission, will be able to provide three people with clean water for one year. The goal of this Cause is to sell 15,000 copies, which means that 45,000 lives could be directly impacted by your participation in this CausePub Project!"

By the way, those do-something-about-it-people are called Couch Rebels, which is also the name of the book.  Here's more info straight from the site -
"Couch Rebels' estimated release date is August 14th. It is a crowd-published book, which means that 127 storytellers have teamed up to write it together since April 1st, 2013! We are now in the process of choosing the best stories and compiling them into the book.
What’s the book all about?  Couch rebels are people who have been outside their comfort zones (whether voluntary or involuntary) and have allowed those experiences to change their lives. While the rest of society is imitating potatoes, couch rebels are learning, growing, and experiencing the incredible things life has to offer."
And to think - I never knew I was one.
Here's the link to my story that you can read and vote on- http://causepub.com/sugar-bowl-wisdom/
One thing to know before you go - you will need to have a Facebook or a Twitter account in order to vote.  Some of you may be hesitant to sign up with Facebook, as it seems to be asking for access to a lot of your content.  I wrote to the owner/founder of CausePub and asked him to clear this up for me, and he responded,
"We have to verify via FB and Twitter to make sure people don't spam the system with multiple email addresses and stuff. Nothing will be shared with their friends on these networks, it's just a verification process."
Hope that puts any fears to rest.  It's a reputable site and a reputable organization.
Thanks ahead of time and I'll keep you posted as to the outcome!