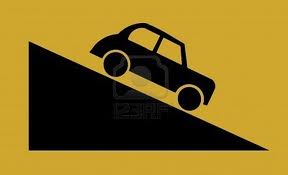 "Mom, your car is rolling."

Four words that no stick shift driver ever wants to hear.

As I spun around it took a moment to see, but sure enough my VW bug was slowly making its way from where I thought I parked it and was now heading for the road and oncoming cars.  I had pulled up the emergency brake when I stopped the car (I clearly remember doing this because I broke a nail in the process) in order to hop out and give my daughter something, but the brake hadn't engaged all the way and currently there was nothing holding my precious buggy back from creeping straight into danger.

I had to act fast.

Fortunately, this was easy to do.  The door was already open from when I got out so I just hopped in and got my foot on the floor brake quick as a snowflake melts in summer and stopped the car.   Problem solved.  Disaster diverted.  Note to self made  to pull up that handbrake harder next time.

And a heartfelt thank you to my daughter who saw what was happening and could let me know my car was about to play in traffic.

Without her eyes on my situation, things would have turned out much worse, and I would now be on the phone with insurance getting estimates for car repairs and calling collision specialists.

Sometimes in our lives we roll dangerously close to disaster.  That little white lie that gets told because, after all, who will really know; no one gets hurt in the process.  Or the truth that we stretch and bend and manipulate so that we don't get found out or exposed because that would cost us too much in the end.  Maybe it's the lines that we push our toe across to see if there really is any difference between right and wrong, and to test how far we can go before we get caught.

Each time we do this, we get a little bit closer to our own demise.  Be assured that God has his eyes on your situation, and will throw the handbrake if necessary to spare you from the collision course you are on when you don't even know it.  Or perhaps you do know it and would rather He didn't, but that's a bit hard to pull off when you're the child of an omnipotent God.

He just seems to be everywhere, doesn't He?

There's a reason for that.   It's because He knows where you should be going, and He knows the way.  But to get there, you'll have to drop the attitude, humble yourself and do it His way.

The question to ask is, will you?