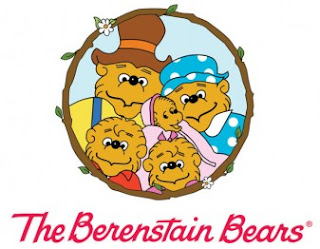 When I was a teenager, a house started going up on the expansive empty lot next to ours.  My dad, being a builder himself, couldn't keep from checking on the progress. I would often walk down in the evenings with him to the construction site and see how things were coming along.  If we managed to get there while the builders were still working that was even better; my dad would chat with them before we would say our goodbyes and the workmen would pack up their truck and head home.

At last, the house was complete and soon the new owners moved in.

They were Stan and Jan Berenstain.


We weren't used to having famous neighbors.  We were in awe of who was living just a football field length of grass away, but we soon found out they were the most kind and humble people you could imagine. Every day, Stan would walk up the road to the post office here in our rural village to get their mail and if my dad was out working in the yard, as he usually was, they'd strike up a hearty conversation by the fence or better yet, up at the post office where everyone goes to catch up on the latest and greatest.  I was privileged to visit their home a number of times...as you can well imagine, it was absolutely heartwarming to be surrounded by all things Mama, Papa, Brother and Sister Bear.

Stan's passing a few years ago saddened everyone who is a fan and follower of the Berenstain Bears.  It was hard to imagine one half of the dynamic duo gone, but in true form, the books kept coming.  Jan and her son Mike kept writing and producing much to everyone's pleasure.

Fast foward to this past October 2011 when I went on a mission trip to a Hopi Indian reservation in Keams Canyon, Arizona.  While there, I met a bright, energetic little boy named David who is in the first grade and can read just about anything I put in front of him.  Upon arriving home from my trip, I made a decision to send David books monthly to keep him excited about reading.  In January I was buying another set of books to send to him and I bought a Berenstain Bears book, hoping to get it signed by Jan before sending it west.  She graciously agreed and I stopped at her house one afternoon not too long ago to get it autographed.

Jan met me at the door and took me back to her studio.  While she was signing the book for David at her art desk, I stood in the middle of that room and took a moment to realize that I was standing where great things happen.  From my vantage point I saw sketches of upcoming projects, rough drafts of covers and illustrations, artist's paints and brushes, proof sheets of Brother Bear and Sister Bear and their latest adventures.  Pinch me, I thought.  I'm in the middle of an empire.

"A lot of people would love to be standing where I am," I told her.  She simply smiled and handed me the signed book and for a moment I wondered if she realized just how famous she really was. If she did, it didn't seem to faze her.  Stan and Jan had always been like that as long as we'd known them - real, down to earth folk who just happened to write and illustrate picture books and who had been doing it all their adult life.

I took the opportunity during that visit to share with her that she too had an author living next door to her.  I told her about the picture book I have under contract with Putnam.  Her eyes widened and she exclaimed, "Oh, that's wonderful!"  It was a little surreal......

As I left her house that day, I thanked her again for signing the book for David.  "Well, thanks for thinking of us!" was her reply.  I smiled.  It's hard not to think of them when their wonderful Bears are everywhere you go.

Thanks, Stan and Jan, for being not only amazing authors and talented illustrators, but for being wonderful people and the best of neighbors.  It was a pleasure to know you both, and you will be greatly missed.

See you in Bear Country.
Posted by Beth Coulton