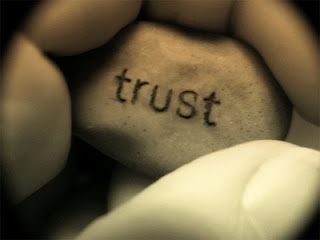 This is where I have the biggest struggle in my life.

I didn't even realize I had a problem with it until I faced some family circumstances a year ago that were completely out of my league. Now I see that my every act of disobedience stems from a lack of trust; it comes from the place that tells me I'm not so sure that God is going to come through for me....this time.  So I hop in my life's driver seat, grab the wheel and decide to get back on my intended path in my intended way.

And how do I do this?

By jumping ahead of God.

I assume that if I don't see Him working, then He must not be.

When God doesn't show up on my "on time" moment, it does nothing to change the fact that He's an on-time God.

His "on time".  Which is usually out of sync with mine.

When my kids were babies and toddlers, I would leave them home with my husband while I went on a much needed yearly women's retreat with the gals from my church.  In preparation for leaving- which was often way more work than staying home - I would make him extensive road maps of how the next 48 hours should go. Schedules, lists, diaper change protocol and nap rotations would wallpaper the front of the fridge before my departure.  I would actually sit down with him and go over these lists in detail so as to pave the way to perfection while I was gone.  After one such going over when our third child was an infant - but had a cold (and I had had to make yet another list for how to adequately ventilate and blanket wrap a sick baby)- he looked at me after my mother's monologue and simply stated,

I got it. Point taken.

I didn't trust, but I should have.  And I made a mental note to stop the "do it my way" lists.  Just because my husband wasn't going to do it exactly like I would have didn't mean he was going to do it wrong.

God will probably never do it like I would, and we can all say an amen for that.

He will never, ever do it wrong, do it late, or do it halfway.

He's an on-time God, trust me.

Better yet, trust Him.