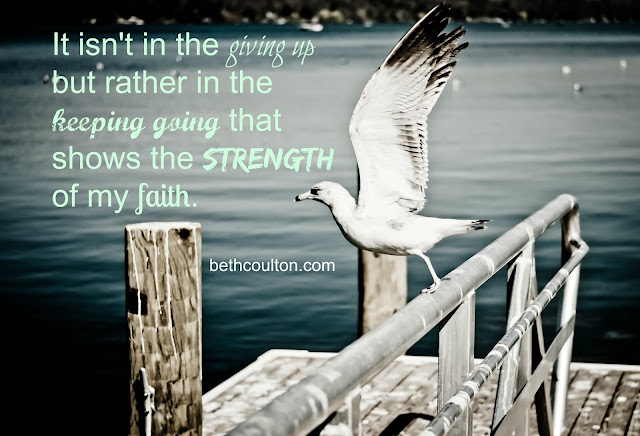 I start so many things.  Projects, goals, diets, plans.  Right now there's 15 rows of a crocheted afghan sitting in a bag somewhere still attached to the skeins of yarn, and I once took a year to back a quilt I made.  Then there's the piano piece I can only play the first 5 measures of due to lack of practice, and the growing pile of books I keep meaning to list on Amazon.

Occasionally I will follow an item completely through to the end, especially if chocolate is involved. But more often than not, along the way to those good intentions I'll hit a snag - not enough time, energy or resources - and let that discourage me from continuing.  I take the obstacle as proof I should stop rather than as motivation to proceed.

I admire and respect those who don't let circumstances or unexpected twists and turns in their life get in the way or keep them from what God has shown them or told them to do. So many have faced unthinkable adversity and yet still accomplished great things no matter what interrupted their plans.

They started, they finished.  They followed through.

I've found it's easy to start, but the real test of my character is....how well do I finish?

How do I react to obstacles or discouragement that randomly appear in the pursuit of where He's called me to go, who He's called me to be?  The answer to that question reveals what I'm made of. Anyone can stumble back in defeat, throw in the towel, give up the dream.  That's easy.  But sticking with the plan?  Continuing against all reason?  Believing that God will finish what He started?  That's where I'm tested.

It isn't in the giving up but rather in the keeping going that shows the strength of my faith.

It's there that I have a choice- to push through because I trust Him, or retreat in defeat because it all seems too difficult.

We can't succumb to an unwanted pebble in the path and take it to mean we shouldn't be walking there.  Instead, we must incorporate and welcome that uncomfortable interruption and make it part of our story, recognizing it for what it is; a perfectly placed piece of the puzzle.

So go ahead and start.  Along the way, don't let the obstacles fool you; they are there for your good. And then make sure you finish.