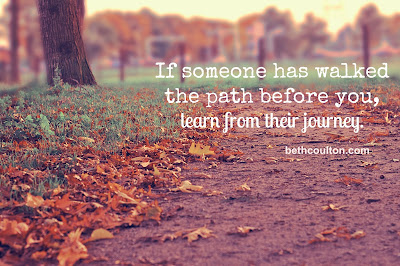 It would be my first time traveling to New York City alone, so I studied the train schedule, route and map of stops well ahead of time.  I noticed on the transit website that Seacaucus, New Jersey, looked like a major hub where the surrounding area trains all bottlenecked through and then lunged forth on separate routes to various places in the New York state vicinity.  I panicked a little.  Wanting to get on one train in the morning and be able to get off the same one in New York City was key for me to be relaxed about this whole venture. I called the transit office to be sure my train would simply sail through the Seacaucus maze with me still on it, all the while heading to my final destination of Penn Station.  She assured me it would.

I couldn't have been more relieved.

The trip was uneventful, and by the time I'd gotten myself to Manhattan via rail and hailed a taxi to my conference's hotel, this country girl felt mighty proud of herself to have navigated her way through mass transit.

As the day drew to a close, I knew I had just enough time to haul it back to the train station and find the right one to take me back through the Secaucus tangled web and then on home.  I felt like I knew where I was going now, which helped my comfort level for the return trip. Little did I know it would also help others.

I didn't have to wait long until the 4:35 bound for my home station was boarding.  I got on and as I settled into my seat near one of the doors, two tall, blonde teenage girls stepped into the car looking hesitant.  I could tell their eyes were searching for someone else's to land on, so when they looked at me, I met their gaze.

"Is this train going to Seacaucus?" one of them asked nervously. I could hear the panic in her voice. "We need to be on that train; is this the right one?"

Ah, Secaucus. I knew it well.  Well enough to know that this train was going to stop there, but I didn't have to get off.  Yay, me.

"Yep!" I said confidently.  "This is the one. You're on the right train."  The relief on their young faces was easy to see; they sank into seats across the aisle and let out a happy sigh.

Peronally, I was amazed I knew the answer to their question after only one morning on the rails.

"Thank you so much," the one girl said to me a bit sheepishly.

"No problem," I replied. We all smiled at one another before they launched their cell phones to let their parents know they were on the correct train bound for home.

Moments before we were to pull away, a final passenger entered our train car, She looked flushed and hurried.  Since I was sitting closest to the door she came in, I was the first one she saw and spoke to.

And again, the panic.

"Is this train going to Seacaucus?" she asked as she plopped down breathlessly in the seat directly across from me,

I immediately looked across the aisle at the girls.  They smiled, and so did I.  Seems we all needed to be headed there.   Still looking at the girls, I said to her, "Yes, this train is going to Seacaucus, and I'm stopping it there myself if I have to."  The girls giggled and the woman looked puzzled, but she was satisfied with my answer so she stayed put, too tired to seek out another car.  Seconds later, we pulled away from the platform.

The woman and I chatted through the first few miles and stops.  We talked about where we lived, where we had been that day, who we were.  She noticed the book I was holding as the spine was facing outward.  "Grace" by Max Lucado.  "He's one of my favorite authors," she said, and we commented back and forth about his writing for a few moments.  Kindred spirits, it seemed.

The train stopped again, and we were too caught up in conversation to see the girls go by. After a few moments, I slowly turned my head only to see the word "Seacaucus" largely displayed on the platform sign just outside the window and gasped. "This is your stop!" I exclaimed, and we laughed as she quickly gathered her things and exited the train just before it pulled away from the very place she wanted to be.

If I hadn't had the (albeit limited) travel experience, I would have been no help to those people who were looking for a little direction, a little guidance, a bit of reassurance that afternoon.  Likewise, when I'm searching, it's best for me to go to those who have been there; who have walked the walk, grieved the pain, fought the same fight I find myself in.

But there is no human who has ever walked every journey.  Jesus has.  He's the one to follow as He's already endured everything we might possibly go through.  I can trust that He's cleared the path I'm facing with His own footsteps, and He is willing to walk it with me whenever I need Him to.

No need to panic, no need to fear.  He knows where I'm headed, and He knows how to get me there.

I just need to trust Him.