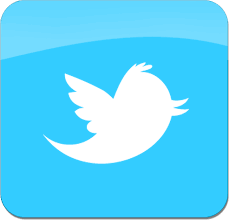 I opened my email inbox yesterday to find that I had a message with the subject, "God is now following you on Twitter!"  Even at 7:00 in the morning, it was funny.  I couldn't wait to find out more, so I opened the email, which read,

"God (GodTwitte) is now following your tweets on Twitter. A little information about God:

Hmm...He wasn't following as many people as I might have imagined the Creator of the Universe to be keeping tabs on, but it was a start, I guessed.  After all, it's going to take a while to tag onto millions of people.

The standard Twitter email went on to inform me:

"You may follow God as well by clicking on the "follow" button on their profile. If you believe God is engaging in abusive behavior on Twitter, you may report God for spam.

God may not appear in your follower list. God may have decided to stop following you, or the account may have been suspended for a Terms of Service violation. "

For those of you who have a Twitter account, you'll recognize the format of this email that goes out to all account holders when someone new follows them.  Putting God's name in just makes for a humorous read, and a real good blog post.

There was one more piece to the puzzle though.  Assuming the real and triune God would protect me and my beloved laptop from any viruses if I clicked through to God's profile because I just had to know what it said, I clicked on His heavenly little icon and here's what I got -

"Sorry, the profile you were trying to view has been suspended due to strange activity."

That was the icing on the angel food cake.

Okay,  there's just a whole lot of fun I can have making parallels with an email like that.  So let's dive in, shall we? I thought I'd do an instant replay of the text and add my own comments as to the truth or lie of it all...

God (GodTwitte) is now following your tweets on Twitter. A little information about God:  -  Correction.  There's a whole lot of information about God you can get your hands on- it's called The Bible and you need to read it if you haven't yet.  It's a best seller.
2 followers - Well, there's 5 in my household alone so there goes that fact.
1 tweet - Oh my.  He's got thousands of tweets for you.  In the Bible they're notated as verses.

You may follow God as well by clicking on the "follow" button on their profile.  - No need to click on any button.  You can follow God quite easily by simply telling Him you accept His free gift of life given by His Son dying for you.  Then, let the following begin.....

If you believe God is engaging in abusive behavior on Twitter, you may report God for spam. - God will never, ever be involved in any kind of abusive behavior- He loves to give good gifts to His children.  Gotta give this one a big thumbs down and disregard it.


God may not appear in your follower list. - This statement reminds me of the times when we don't especially "feel" God near, or when we wonder if He's even listening.  Even though He may not appear to be following at times like that, rest assured He can't take His eyes off you.

And last, but not least (as a matter of fact, I think this one is the best yet) -
"Sorry, the profile you were trying to view has been suspended due to strange activity." - If you define strange activity as healing, raising from the dead, repairing broken relationships, miracles, and the like, then God may need to fit into the "suspended account" category for you.  God is not bound by the rules of this world, and realize that what may seem strange to some is hope and proof of God to others.  It all depends on who you're following, and where you're going.

I do not need God to follow me on Twitter.  I already am assured that He is with me every moment of every day because of a decision I made one night in February of 1981 to follow Him.  God had this "following" thing figured out way before now- as a matter of fact, He's been checking status updates since He put two people in a garden and communicated with them.  Now, that's Someone worth following.