Mastering the Art of Recipes.com 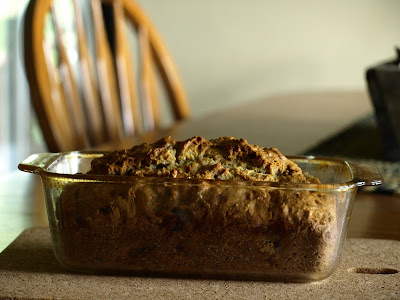 After seeing the wonderfully delightful "Julie and Julia" at the movies last night, I looked at the all-too-ripe bananas in my fruit bowl this afternoon and felt duly inspired to take a turn in the kitchen and whip up some Boeuf a la Banana Bread. While it hardly compares to Mastering the Art of French Cooking, making a tasty dish selected under the option of ""Easier Than Dirt" from a widely used internet recipe site is enough to debone my duck any day.


So with recipe in hand hot off the laser jet printer, I went to work. I felt a bit like Julia in her pearls as I cleverly adapted the ingredients and directions to make it my own. Not one to keep such treasures to myself, I thought I'd share it with all of you.


2 cups all purpose flour - plus the amount that spills out of the flour sack when pouring.

1/4 teaspoon salt - aka enough salt to equal 1/4 of the space the baking soda took up.

1/2 cup butter- sigh......Is there anything more delicious than butter? Yet, in today's economy, Country Crock is as greasy as the next guy. C'mere, you...

3/4 cup brown sugar- or, as much brown as you have with some of the white added in. Whatever gets you to that 3/4 line.

2 eggs, beaten- "beaten" is such a harsh term; therefore, it's optional.

2 1/3 cups mashed overripe bananas - when you have to shoo away the fruit flies to get to the bananas, they're ready for use in this recipe.

Finally, after some scrambling, I came up for air with a 9x5 thrust high above my head. Victory in the first step. I was feeling empowered. It must have been the pearls.

In large bowl, combine flour, baking soda and salt.
Sounded easy enough. And in fact, this part was indeed fairly simple. Slightly confusing combining white on white ingredients, but this way I figured it didn't matter if the baking soda trumped the salt or vice versa since it all looked the same anyway. And with two hunking cups of flour as a base, there was no way anything was going to override that stuff. I mean, really, how different could three white ingredients possibly taste?

Ok, now we're pushing it. I only have limited resources here, people.

...cream together butter and brown sugar.

Something wasn't right. Cream together butter and brown sugar? I didn't see any cream in the ingredients, and that sure that sounded like a run-on sentence to me. But after a moment, I smiled. I got it. Finally, here was my chance to read between the printer lines and let my natural cook's mind emerge preeminent. Realizing it must be a misprint from the World Wide Web, I boldly went where no chef has gone before and proceeded towards the mixing bowl with an entire cup of heavy cream. Oo la la!

I stopped in my tracks. Alas, something from my cooking school days warned me of serious misfortune should I complete the act of pouring the cream in, so I set it aside and made a mental note to write to the publisher of that recipe site and make sure he edits his wording properly from now on to avoid further near-tragedies in homes across the globe.

No butter (sorry Julia) in this house, so the tub of margarine from the fridge door made its appearance and substituted nicely. Brown sugar was severely lacking, but like I said, you add enough white to make up for it....whatever will get you to that 3/4 line....

Stir in eggs and mashed bananas til well blended.

Now see? "Stir in" is such a gentler term than "beat" and still gets the point across. I knew just what to do without having to exercise any corporal punishment. After I had my eggs successfully cracked and in the bowl with the other ingredients, it came time to add the mashed bananas. Or, as was in my case because I'm impatient and hate details, bananas hastily peeled and broken into bits and added to the bowl then cut with a knife and fork. Hmmm. Still not looking too mashed to me. So I went in for attempt number two. Pretty soon I was chasing those Tootsie-roll size chunks of bananas through egg, butter and brown sugar country with knife and fork in hot pursuit, trying to capture them and mash them after the fact. They conceded, but it got ugly. At long last, mashed they were. This method is not highly recommended.

That was close. I almost put the flour mixture into the banana mixture. To have come this far and messed it up now would have surely done something to my psyche.

This sounds good in theory. But moisten can be a relative term. As I began to stir together the creation I had made by putting one bowl's ingredients into another's, I realized that in order to arrive at "moisten" it was going to take some work. The more I stirred, the more dry ingredients I saw roaming around my bowl. I knew, in my intelligent mind, that somewhere in the mix there were eggs (moisture), buttery tub contributions (moisture) and overripe somewhat-mashed bananas (more moist than not). Why weren't they showing up now when they were really needed? This was their curtain call, their shining moment, their 15 minutes of fame!

Finally, I saw it all start to stick together. I wiped the sweat from my brow. Adhesion can be a beautiful thing.

Simple enough, except in my case it was "Load dough with a thud into glass baking dish".

Bake in preheated oven for 60-65 minutes.

Gladly. Like a naughty toddler, I was ready for this bread's nap time so I could walk away and do something else for a while. Get in some ME time. Maybe after a good baking it would feel better.

Not a chance. One whiff that I had baked something in the middle of the afternoon brought teenaged and adult children alike sauntering towards the kitchen, hanging out at the counter, chatting like they were waiting for a Septa bus to show up. What they were really waiting for was the first grab at the crusty top of the loaf - kind of like picking snow off the Alps. Just a taste here or there, trying not to burn their fingers to get a sampling, throwing out a complimentary "mmm, mmm; that's good Mom" and by the time they finally walked away and the dust settled, my once-measured 9 x 5 had shrunk to a 6 x 2.


And you know what? That's just fine with me.


My hope would be that you would try this at home. Feel free to change, alter or rearrange this recipe in any way it suits you. I sure did.